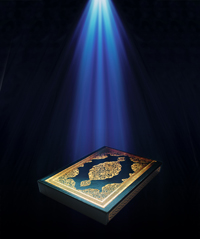 Evident from his lectures, Shaikh’s main standpoint is that the Qur’an needs to be seen through its own inflection and in its pure form without any alteration whatsoever, as it is a divine text accessible to all who want guidance from it. While viewing his presentations it is apparent that his point of difference is almost entirely with the Judeo-Christian tradition, namely the Bible and he is rarely directly critical of Muslim traditionalism. However by explaining the Qur’an through the inflection of Ayaat, he makes it obvious in a subtle manner that most traditional beliefs that have crept within Islamic canon have their origin from the Bible and not the Qur’an. He thus appeals to his listeners to prefer the Qur’anic viewpoint instead of the Biblical or traditional one. This call to the Qur’an in its pristine form has brought Muhammad Shaikh at loggerheads with the traditional schools of thoughts and conservative religious scholars, who find his approach to be novel and see their own traditional faith strongly challenged by his teachings. While viewing his lectures it can be seen that his expositions on numerous contemporary subjects such as Hijab, Jihad, Riba, Qitaal, Vision of Ibraheem, Book of Moosa, Kaabah and Qibla etc. is radically different from classical as well as contemporary scholarship and offer unique insights for Qur’anic understanding, much different from the tradition based or politicized version of the faith.