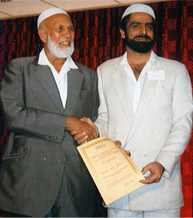 It can be observed that although a brief student-teacher relationship was maintained, Muhammad Shaikh does not follow Ahmed Deedat in entirety. He has adopted Ahmed Deedat’s approach on Biblical criticism and Muslim-Christian dialogue, but a comparative analysis of the lectures of these two speakers demonstrates that they have different positions on a variety of issues. E.g. while Ahmed Deedat considers some parts of the Judeo-Christian Scripture to be divine, Muhammad Shaikh maintains that it is entirely a man-made work. Similarly Ahmed Deedat’s lectures were more about analyzing Christianity and its sources from a Muslim standpoint, while Muhammed Shaikh’s presentation is more about Qur’anic exegesis, and how it differs from the Bible. While this disparity is evident, Muhammad Shaikh holds the highest reverence for his former teacher, and continues to broadcast his debates and lectures through IIPC TV.